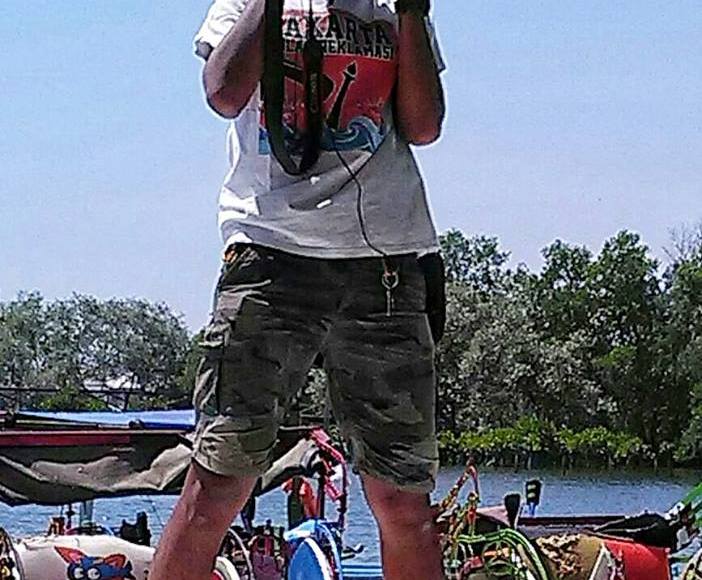 A talented video-maker under a youth community named SORGE Magazine, Harinugroho primarily attained Bachelor Degree in major of Public Administration from Parahyangan University, Bandung-West Java. Initially, he yearned to be a journalist, but writing wasn`t his game. Until once he worked as a camera person at ANTV – one of private televisions in Indonesia – handled news programme, and obviously it gave him a start to be a video maker like today. SOROTAN was in full-hearted condition to have Harinugroho being interviewed at 3 A.M in Taman Suropati, Menteng-Jakarta.

Began with his habit of taking notes, he always assumes that camera is attractive because its function that also takes notes from an incident through recording mode. With an ability of camera in presenting complete video or picture towards occurrence that happens in surrounding.

In producing a video, personally, he is inspired by overseas footage climate on video-taping; in which other countries have complete documentation. Their national televisions journalists to local citizens have habits to record any single event; so they tend not to miss anything that happens. Unlike what occured in Indonesia that Orde Baru (New Order Era, president Soeharto`s governance) left the people with a number of missing events, because at that time televisions were managed to have strict censorship. So, today`s public has a very limited footage towards that particular era.This leads Harinugroho in dreaming to have a visual record museum containing of Indonesia`s historical records; so Indonesia`s data can be fully complete in further.

In economical side, being a video-maker supports him to live adequately. He is sure that as long as people need to record history that`s important to be kept, then they are most likely to use video. To him, video is a memory business and a business of filing antiquity. However, it`s not his interest anymore to do video-making for giant industry; he`ll still make living as a reportage video maker, not as a journalist. His idealism is to apply his basic education got from Social and Politics Faculty through a reportage video related to the public.

In facing AEC 2015, Harinugroho frankly spoke that he`s never that sure about Indonesia`s society; but he encouraged Indonesians not to be afraid. Foreigners being in the country should be more about cultural and knowledge exchange.The climate of competition is better to be a juncture of cooperation among ASEAN countries.